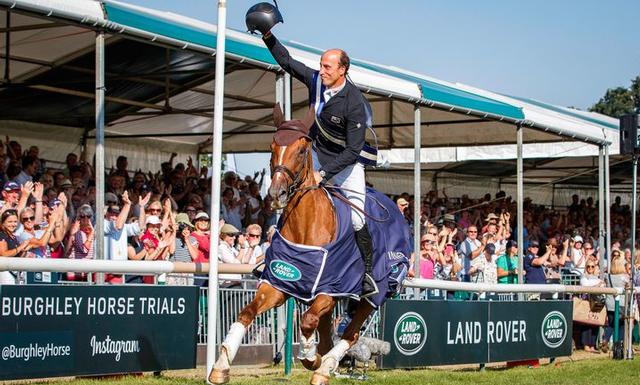 Tim Price has ridden the round of his life to win the Land Rover Burghley Horse Trials in the UK this morning.

The 39-year-old continued his masterclass effort with a clear round aboard Ringwood Sky Boy in the showjumping to finish on 27.3 penalty points. Five-time Burghley winner Andrew Nicholson put all the pressure in the world on the top four with his clear round aboard the very promising Swallow Springs in their first 4* start, but it wasn’t quite enough to add to his trophy cabinet and he finished in third place on 32.1 with Oliver Townend (GBR) aboard 2017 champ Ballaghmor Class second on 31.9.

Tim was also 10th on Bango. Just eight of the remaining 39 combinations managed to go clear and inside time in the showjumping, and two of those belonged to Tim who has been in the top five at Burghley for the past three years with Ringwood Sky Boy.

It is his second 4* victory – the current world number four ranked rider won Luhmuhlen in Germany aboard Wesko in 2014 – but he has been on the podium in prestigious 4* events at Badminton, Burghley, Kentucky and Pau. It was New Zealand’s 14th Burghley crown and 30th 4* title, and it is the third 4* trophy to head to the Price household this season with wife Jonelle winning Badminton and Luhmuhlen.

“I am just so so thrilled,” said Tim who described Ringwood Sky Boy as “such a trier”. “He has always been putting his best hoof forward with everything. I’m really just trying to stay up with the mrs! She is a great driving force for both of us – we are lucky to have each other. I am sure we will look back on this in years to come – 2018 has been a very special year.”

To win meant “absolutely everything” to the Rio Olympian who also paid tribute to Ringwood Sky Boy’s long-standing owner Verenna Allen along with Robert Taylor. “Burghley is the place you want to come to and put your best foot forward. You have got to bring your best game – from a riding point of view, this is where you want to be your best. This is very special – I will always carry it with me.”

Jonelle was also very proud of their efforts. “Tim is world class – there is no shadow of a doubt,” she said. “They are truly deserving winners. This year is remarkable – I wouldn’t have said it was possible at the start of the year but dreams do come true. You have to enjoy these things when they happen – you don’t know what is around the corner.”

Sir Mark Todd added four faults to his tally to finish in 18th place on 49.6, rounding off a weekend that didn’t quite go his way. “He jumped a really nice round,” he said of NZB Campino. “Unfortunately we had just one down. It has been a bit like that all week with him – nearly but not quite in all three phases.”

Caroline Powell and On the Brash 31st and Dan Jocelyn aboard Dassett Cool Touch 32nd. Burghley débutante Ginny Thompson decided Star Nouveau had done enough with such a “beautiful and comfortable” cross country yesterday and withdrew her from the final phase.

“She was not quite herself this morning and in her best interest I decided to withdraw her from Sunday’s final phase,” said Ginny. “I am just so thrilled – she has given me an experience of a lifetime.”

Andrew also chose not to bring Jet Set IV back for the showjumping and Mark was eliminated during yesterday’s cross country aboard Kiltubrid Rhapsody.