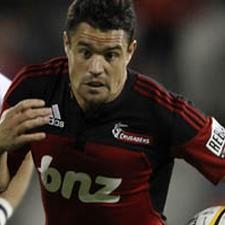 RUGBY - All Blacks and Crusaders pivot Dan Carter is the first to admit his game was well below par against the Hurricanes in round eight of the Super 14 competition and he wants to atone against the competition leaders, the Waratahs, in Christchurch on Friday night.

Carter became only the second player to rack 1000 points in Super rugby in the 26-all draw against the Hurricanes, but it was perhaps his least impressive performance in 76 outings for the Crusaders since his debut against the same side in 2003.

Apart from missing the match-winning conversion, he failed with two other goal attempts and made some fundamental mistakes when kicking for touch.

"Personally I was pretty disappointed in the way I played. I didn't really offer much and just went through the game playing within myself a little bit," Carter said at Crusaders training on Tuesday.

"But I've recognised that and there's areas I want to work on and to improve."

Carter was not looking to blame the swirling wind for his uncharacteristic errant kicking.

"There was a swirly wind but that's no excuse as I've played there many times before and while it can be challenging it's nothing out of the ordinary."

He admitted his concentration was not all it should have been when a kick for touch from a penalty sailed dead over the goal-line.

"I was still cruising coming off half-time and wasn't really switched on. I have pretty high standards and things like that are pretty embarrassing - it was a bit of a shocker and I realise I should be producing a lot better than that so I'll be working hard to rectify that."

Carter said he felt his form had been building during the first half of the season but he had played little rugby in the last fortnight after being used off the bench against the Lions in round six then the Crusaders having a bye in round seven.

"I've pretty much had the last couple of weeks off so it's a matter of picking up that [earlier] form. Obviously you want to be playing your best rugby at the end of the campaign so I just want to keep improving, keep building and to be firing when it comes to the last few rounds."

The chance of playing the competition leaders [Waratahs] at the Crusaders home ground appealed to Carter.

"We realise we missed an opportunity against the Hurricanes and want to rectify that. It is nice being back home playing at AMI Stadium and it's exciting to play against the team at the top of the table.

"There's nothing better than beating the guys at the top so we will be doing everything we can in front of a home crowd on Saturday night to achieve that."