Northbound and Down: the London-based NZer who journeyed from Alaska to Mexico by bicycle   18 Aug 2020 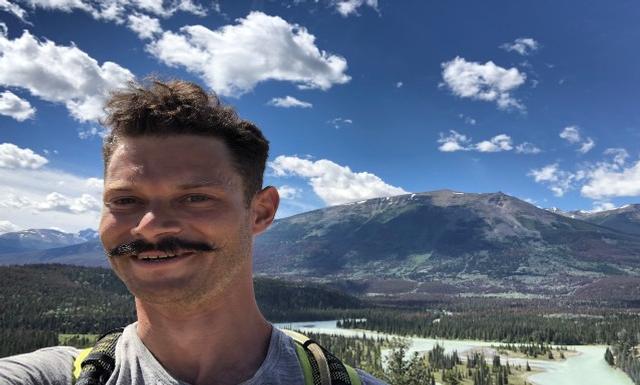 An exiled Kiwi has been hailed as inspirational for completing a remarkable American cycling adventure.
Auckland-born Otto Ecroyd went from being unable to fix a simple bicycle puncture to embarking on a 5,000-mile journey from Alaska to Mexico.
And now the fearless 32-year-old’s exploits have earned him rich praise from former National Geographic Adventurer of the Year award-winner Alastair Humphreys.
London-based Otto lived to tell the tale of his own adventure and now he has achieved another goal with the publication of a book all about his once-in-a-lifetime trip.
Intrepid Otto’s book ‘Northbound and Down - Alaska to Mexico by bicycle’ is described by the publishers as the ‘everyman take on breaking out of the everyday’ on an ‘achievable adventure for the great unwashed’.
“If you think you aren’t ready for adventure, read this,” Alastair Humphreys
said.
“Otto was wildly underprepared for Alaska. Who can't change a tyre? His journey is a great example of what you can achieve by just taking the first step.
“It is truly uplifting and inspirational – especially at a time when we’re all being urged to get on our bikes to try to beat coronavirus. He shows that nothing should stop you.”

The Auckland Grammar School old boy and Auckland University graduate moved to London in 2010 and studied for a master’s degree in finance at the London School of Economics.
He went on to become a manager with McKinsey in London before he says ‘corporate disillusionment inspired me to up sticks and embark on an adventure’.
“I decided to go bike touring because I was bored at work, too old to get wasted in every hostel in Latin America and too poor for a proper mid-life crisis,” Otto said.
“Northbound and Down’ is a book about a normal guy searching for inspiration in adventure. It’s about breaking out of the psychological rut that is the daily grind.
“It is Cheryl Strayed’s ‘Wild’, but motivated by a struggle against a life on auto-pilot rather than a reaction to a life collapsing.
“A whole middle class, middle career and middle fulfilled generation is undergoing a similar calculus. Successful, but not driven, affluent but not rich, with jobs that work but don’t excite.”
A cycling adventure was not on the cards when Otto started contemplating his next big thing.
“When I came to London and I saw cyclists pitting their wits against buses it sort of confirmed for me that I was better off steering clear of two wheels,” he said.
“I hadn't ridden a bike in ages but I fell in love with the idea of bike-touring after my girlfriend regaled me with tales about it.
“I hadn't ridden a bike since I was a teenager and didn't know how to fix a puncture but it seemed perfect for me and so I jumped on a bike and headed to Brighton – and made it back in one piece.”
He was inspired to look overseas by Humphries, whom he regards as one of his idols in the cycling world due to his African, Asian and South American escapades.
“At first I was thinking of going from Argentina to Alaska but it would have take two years and it would be into the wind,” said Otto who now lives in Shepherds Bush, West London.
“Then I committed myself to Alaska to Mexico and I never looked back once I set my sights on the trip which was full of fascinating people and places.”
“Northbound and Down isn’t Ranulph Fiennes crossing Antarctica, or ‘The Man Who Cycled the World’ - it’s more entertaining than that,” Otto said.
“I have to say that the coolest thing about the trip are the people you meet – the incredible characters on the road.
“There’s the people that you have crazy interactions with and the generous people who bring you into their homes and their lives.”
According to publishers Great Northern Books, ‘Northbound and Down is like a Bill Bryson book if Bill stayed out of the pub once in a while’.
Along the way, Otto is joined by moose and bears and the refugees from ‘The Lower 48’ states and characters in cowboy country.
Down the Pacific Coast, there are redwood forests, hippie surf towns, mansions and homeless camps, Californian plastic perfection and the weirdness of the American dream.

“Once I became battle-hardened and was able to actually sit down rather than stand up all the time when I got off my bike I had an unforgettable time,” Otto said.
“It’s funny looking back at how I went from being a cycling novice to embarking on a madcap adventure but I’m so glad I overcame those initial issues.
“It was the best thing I could have done and I hope my book shows others that anything is possible. My advice would be to get out and do it – the hardest step is the first one. And then just enjoy the ride.”
Otto’s debut book ‘Northbound and Down' is available from Great Northern Books, call 01274 735056 or visit www.gnbooks.co.uk