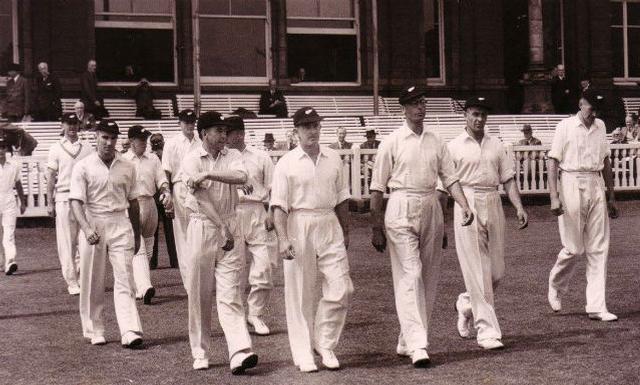 He’s known globally as one of the greatest fast-bowlers and all-rounders in cricketing history, but now Sir Richard Hadlee is focused on his father’s own cricketing story. He’s described publishing The Skipper’s Diary – his father’s record of the “Forty-Niners” tour of England as his “greatest life achievement” in his sporting life both on and off the field. So how did it come about?

Growing up with Walter Hadlee as dad, it’s unsurprising that cricket is in the blood. The five Hadlee boys – Barry, Martin, Dayle, Richard and Christopher – were all encouraged to play the game. With cricket pitches in the backyard, they played many games against each other, and Richard recalls: “it was just a question of time really, if you showed a little bit of interest or potential then you’d come through all of the age group cricket – for me it was playing for Canterbury Under 12s, Under 14s, Under 16s, Under 18s, Under 20s... and suddenly you’re playing your first big game for Canterbury against Auckland at Lancaster Park in 1971 (which was a nerve wracking experience!) – and then a year later you’re playing your first test match for New Zealand. So it was just following a pathway if you like, and it’s been a remarkable part of my life. I have to be very grateful for what Mum and Dad offered us in the way of encouragement and advice – and Mum of course used to wash all our Whites and have them in pristine condition for each of the boys who were going to be playing. Everything was ready – picnic lunches and these sorts of things; Mum had made a tremendous contribution in other ways.”

“And it’s fair to say that there was a lot of pressure, and a lot of expectation – being the son of Walter Hadlee, and the cricket legacy that he left New Zealand Cricket... and the expectation was that we’d all be good at it.”

Three of the Hadlee boys – Barry, Dayle and Richard – went on to play together in the inaugural 1975 Cricket World Cup, playing England at Trent Bridge in Nottinghamshire. “It was an unbelievable thing for three brothers to achieve, being in the same team playing a game,” Richard remembers with fondness.

And he says the diary also played its part. “We grew up with Dad’s diary; he would get it out from time to time and read excerpts from it – so we had a bit of an understanding and an appreciation of what the Forty-Niners were all about. In fact, no other team in the history of NZ Cricket have been named after the year in which they played, so these guys were very special indeed.”

Walter of course, was Captain of the Forty-Niners. He had written a book himself, but unfortunately the publisher cut a significant portion, limiting the chapter about the tour to around 30 pages - meaning the story of the Forty-Niners still needed to be told.

“When Dad passed in 2006, I had possession of the diary to look after, and people kept talking about the Forty-Niners,” Richard explains. “I went to reunions where the players were still alive, and I could just sense the love, the respect, the camaraderie that these guys had for each other – not only on the tour, but after the tour and for the rest of their lives.”

It was over dinner with commentator Bryan Waddle that they were discussing cricket tours and how things have changed. Richard mentioned the diary – and was encouraged by Bryan to publish it. “So painstakingly, with a magnifying glass, going through word by word, line by line, page by page, over the period of an 8-month tour was a very challenging exercise,” Richard recalls. It took him 4 years to transcribe the diary in its entirety.

“It’s something that I wanted to do to honour Dad, because I knew that he wanted to have his story told. We wanted to recognise the performances and the achievements of the Forty-Niners because these guys were pioneers; they’d done something that had never been done in the history of NZ Cricket. Previous tours that went to England in 1927, 1931, and 1937 – they didn’t win; they won a few County games but they hadn’t been successful in the test matches and that sort of thing. And then all of a sudden the Forty-Niners held the might of England – they lost only one game (out of 37) on the tour, and they came home as heroes. And so to recognise those players, that again is something special.”

Sir Richard also emphasises that this is more than a cricketing book – it is a history book. The diary begins several days before departure, and then it is six weeks on a boat before they arrive in England. “What do you do for six weeks on a boat? It’s there in a daily account, which also makes it special.”

It must have been a fascinating time in history for the Kiwi team to be visiting Europe and seeing the remnants of war. Europe was rebuilding, there were fuel shortages, and rationing was still going on – the Forty-Niners themselves had ration books. Richard commented on how during the tour the team made themselves available – probably even more so than players do today – going to events, to charities, to dances, to countless dinners – and visiting a lot of factories during the tour as well.

“I didn’t realise this until I read the diary,” Richard explains, “But they even went into Germany and played a game there against the British Combined Forces, who were occupying the Rhine as peacekeepers and keeping the Germans and the Russians apart because there were a few skirmishes going on at the time. It’s all documented – which makes this more of a history book. I don’t think there’s ever been a sporting book like this, with a day-to-day account from the Captain – an insight from the leader of the team.” The book is also complemented with a 2-hour long DVD documentary*, introduced by Richard and including player interviews as well as archived film footage. “The book is the Skipper’s Diary, so that’s Dad’s point of view, and now we have the documentary on the Forty-Niners – so that’s the team’s story.”

The Skipper’s Diary was released in NZ in 2017, and has been well-received there and cherished by cricket people – but Richard continues to emphasise that the book is more than a cricketing story. In comparison to players today flying Business Class and staying in 5-Star hotels, he says, “these guys did it tough”. They were paid a pound a day, but because the tour was so successful, they were given an extra 10 shillings a day partway through the tour and that was then backdated to the day they left. “These guys thought they were rich!” Richard says. “The point is that they were amateurs, they came from all sorts of different backgrounds (Walter was an accountant), and they played because they wanted to represent their country; they played because they loved the game – and the only way that they’re going to survive a tour is to get on and accept each other for who they are, what they are, and their team goals... there were a couple of incidents on tour and they are mentioned – nothing is left out.”

All previous tours had lost money – whereas the Forty-Niners tour made a £17,000 profit (in today’s money, almost $1 million). The profit was distributed across the 4 major cricket associations in NZ at that time, as well as some district associations. Money was also held back for future tours, which meant that the Forty-Niners had guaranteed the future of NZ Cricket. “These guys were pioneers,” Richard explains, “They gave NZ Cricket credibility and respect”. NZ was rated as a test-playing nation for the first time.

The Skipper’s Diary is now available in the UK, something that Richard is greatly excited about. “This is not only a NZ story, it’s an England story as well, and about the support that the team had through the MCC (Marylebone Cricket Club)”.

$10,000 has already been distributed to each of three amazing charities supported through sales of The Skipper’s Diary – NZ Cricket Museum, NZ Cricket Players Association (fund for players who fall on hard times), and the Cricket Live Foundation – an organisation that funds cricket camps and schools for underprivileged street children in Sri Lanka and India. “Dad would love that, to know that his story has reached and benefited so many young people who just don’t get the opportunity to learn life skills – and through the Cricket Live Foundation, they get to do that through playing cricket.”

The Skipper’s Diary is available for purchase in the UK on Amazon for only £29.99. Although it is not physically present in book stores, it can be ordered in.

*Regrettably the DVD does not come automatically with the book in the UK, but can be purchased separately (either DVD or downloadable copy) via theskippersdiary1949.com.

Queries should be directed to: [email protected]

Charlotte Everett has been contributing to NZNewsUK since 2011, and currently serves as London Editor – a post she has held since mid-2013. She has been based in London since mid-2007 and has a broad writing portfolio, including music/entertainment, book and theatre reviews, travel, NZ sport, Kiwi success stories, vegan food, and WW100/ANZAC. She is also an experienced freelance tour guide, and leads city walks across London and Oxford several times a week. You can follow her on Twitter or Facebook.