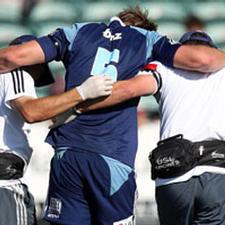 RUGBY - All Blacks lock Ali Williams' recovery from injury lasted only three minutes into the Blues' warm-up game with the Chiefs at North Harbour Stadium on Friday evening.

Williams suffered an Achilles tendon injury last season which ruled him out of all but the first few weeks of the Super 14 season.

A medical report confirmed that he had ruptured the same Achilles tendon as last season, slightly below where it ruptured last time.

He will go into surgery on Monday and will be out of action for 12 months.

It was reported that Williams knew the second the injury happened that it was another tendon rupture and was devastated.

He had been working out with the Blues since the start of their preparation in December and the game at Albany was his first for the season.

He went down in a general play situation and when the ruck cleared he was left lying on the ground.

It was immediately obvious that the injury he had suffered was serious and after rolling around on the ground while being attended to, he had to be helped from the field and was unable to put any pressure on his right foot.\