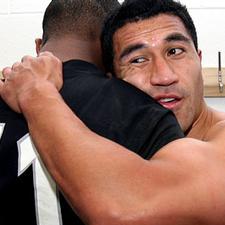 All Blacks focus on their next match

It all starts up front, but the All Blacks' back-three are looming as their potent weapon against France as they look to finish a frustrating rugby tour with a much-needed flourish.

The All Blacks flew into Marseille after seeing off a spirited but limited England 19-6 at Twickenham, thanks to a game-breaking Jimmy Cowan try midway through the second half.

The efforts of fullback Mils Muliaina -- who played his 81st test to become the second most-capped All Black alongside Justin Marshall -- Sitiveni Sivivatu and young Zac Guildford was one of the big talking points.

In the modern game of incessant kick and chase from inside a team's half, they tried their best to counter-attack and stretch the English in a welcome change of approach.

They couldn't finish their chances, with Muliaina correctly denied a first half try by the television match official when his foot slid into touch.

With Cory Jane likely to return for the impressive Guildford in Marseille this week, attack coach Steve Hansen hoped it would be more of the same behind what should be a brutal forward battle against France, fresh from beating the Springboks 20-13.

"The boys countered well. It comes down to them having faith in their ability then backing their instincts," Hansen said.

"People worked hard to get back and I think we were a bit unlucky not to crack them wide open on a few occasions. on another day we may have.

"The pleasing thing is we're starting to exhibit some of the traits that you'd like to see. One day luck will fall our way and we will open someone up pretty big."

Cowan summed up the feeling in the dressing room when he said it was flat, rather than celebratory as they retained the Hillary Shield.

England were frustrating opponents, he said, and successfully spoiled the All Blacks' ruck ball.

The test in rugby heartland in the south of France would definitely be tougher, but more enjoyable, the All Blacks halfback said.

"We're not quite over the hump yet but we can feel it coming. We were probably unlucky we didn't finish off with a couple of tries.

"Next week will be a different story. The French like to use the ball and hopefully we can get a good flow going."

The All Blacks scored just three tries from their tests against Wales, Italy and England, a poor return for a powerful backline directed by Dan Carter, who passed Andrew Mehrtens New Zealand record of 967 test points.

Muliaina, refreshed after a self-confessed slump in South Africa in July, played with intent at Twickenham and said the back-three were keen to step it up again.

"We're getting a lot better. We moved the ball a lot and there's still opportunities we were a little short of finishing off. Siti played an outstanding game. Hopefully we can finish some of those opportunities off next week because we're starting to feel really good."

With questions over New Zealand's depth in some positions, the outside backs are now looking strong with Guildford's arrival and Ben Smith's useful debut against Italy.

Hawke's Bay 20-year-old Guildford was the undoubted success story of the tour, with strong efforts against Wales and England.

Hansen said he would give them a selection headache in No 14 this week, although it would be a harsh call on Jane who was rested.

"Cory's probably been our most outstanding wing, and Siti's played a boomer. That quality of play is forcing every one of them to stand up and play... it's a pleasant thing to have, a young guy (Guildford) like that come into the side, he was in the front row of the haka, he doesn't lack any confidence. He's going to be good," Hansen said.