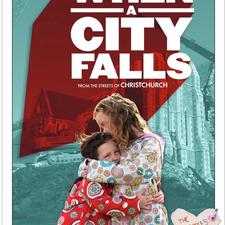 Some stories need embellishing but the tale of Christchurch is not one of them.

‘When A City Falls’ is the record of the February 2011 earthquake that devastated the Garden City and continues to make its mark. Filmed and directed by Gerard Smyth, the documentary allows Christchurch to speak for itself.

David Larsen in The Listener wrote “Smyth proceeds to show us the aftermath through a richly textured kaleidoscope of interviews, avoiding editorial comment, but talking to so many people that a vivid sense comes through of a community responding to a massive event”.

UK based New Zealanders have the opportunity to view ‘When a City Falls’ on the first anniversary of the quake that killed 183 people. The film will show for two sessions at London’s Ritzy cinema on Wednesday, 22 February as a fundraiser. Each session will be accompanied by a performance by Ngati Ranana, London's official expat Maori community.

Organiser Trevor Sutton has been inundated with requests for more information, including pleas to organize screenings in Australia. Mr Sutton has said, “the evening is a chance for people to come together to not only remember those who lost their lives but also to look to the future of Christchurch and to show the people of Christchurch that we still care about them a year after the quake, especially at this time when Christchurch continues to experience swarms of aftershocks.”

Mr Sutton spent 13 years in Christchurch before returning to his native England but still has friends and family living there. His involvement in the charity screenings stems in large part from the loss of a family friend in the disaster, fourteen year old Jayden Andrews-Howland. Mr Sutton’s daughter also lives in Kaiapoi and he went through many anxious hours before the Red Cross and the New Zealand Herald were able to help confirm her safety.

For London-based expat Jicca Smith, the screenings are a chance to experience a greater sense of solidarity : “too many emotions to put into words, really... it’s about those of us who know and love Christchurch wanting to know and understand what happened and bear witness to it with the people of Christchurch.”

Tickets to the event are £20 with the profits of each session going to the Christchurch Earthquake Appeal and can be found here on Eventelephant.com

The first session has already sold out of its 350 tickets and session two is rapidly filling up.

Listen here for an interview between Kim Hill and director Gerard Smyth on Radio NZ.

What: When a City Falls

I was thinking of booking tickets but cancelled when the terms said the ticket holders must present photo ID that matches the name on the ticket. Why? What possible reason could that be required? Provided the tickets are sold who cares who turns up?

Good question, Ian. We checked with Trevor Sutton - the organiser - who came back with the following reply. Photo ID checks matched to the name on the list/ticket makes it far less likely that people will attempt to forge/copy tickets. With session one sold out and session two rapidly heading that way, these tickets will be in demand.

Hi Kay, at this stage the film will only be shown on the 22nd but who knows. If enough demand comes through, the promoters may be persuaded...

Will this eventually be available on DVD?

As a ChCh resident would lke to say your support is amazing and the film is really worth seeing.

this is a message to Trevor, please be careful with the agency you give your fundraising efforts to, be even more careful if the fund has the word "mayor" in it. the funds that the mayor has put his name to have been going to sporting clubs primarily and the evidence of hardship needed to get any of the individual grants is a hardship in itself. and as someone who is going through all this I say a big thank you for your intentions.