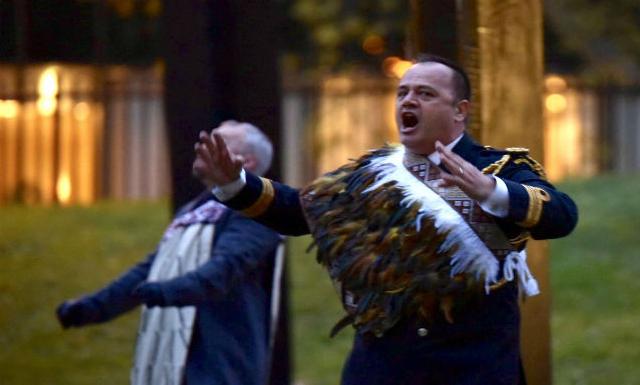 The 104th anniversary of the Gallipoli landings have been marked in London with a number of services throughout the day and into the evening.

Despite the bleak weather forecast, around 3,000 people turned out for the 5am Dawn Service at Hyde Park Corner – this year hosted at the Australian War Memorial. In the centennial year that many ANZAC personnel who survived the conflicts of the First World War would have been making their way home, special tribute was paid to those who returned, as well as to those who lost their lives. Australian High Commissioner George Brandis made particular reference to those who returned in his ANZAC address – stating that although they may have made it home, they were no longer the same – and many went on to lose their lives by their own hand. What we now understand as PTSD, not understood a century ago, resulted in many ANZACs who struggled in the aftermath of the war tragically taking their own lives.

‘Many returned men, the war-time tension released, took to the bottle and ran riot in many parts of the country. It didn’t help, but who could blame them? Many of them had been wounded, many of them had been mentally shocked. It is easier to cure a scar on the body than a scar on the mind. An unsympathetic public judged these lapses harshly with, perhaps, some justification, but they were unaware of the strain to which these poor Diggers had been subjected. It was all very sad. There appeared to be no honour in having served one’s country and we felt withdrawn and unwanted. Even our own families remarked how changed we were.

Of course we were changed. How could one exist in an atmosphere of war without being changed? How could one suffer mud, cold and discomfort, see friends and comrades blown to fragments, suffer the pain and misery of serious wounds without changing? Young as many of us were, we had aged immeasurably.’

The Dawn Service concluded with a wreath laying at both the Australian and New Zealand War Memorials, followed by an emotional haka lead by Ngati Ranana.

Other commemorations throughout the day included the Gallipoli Association Service at St Paul’s Cathedral, the Service and Wreath Laying Ceremony at the Cenotaph on Whitehall, and the Service of Commemoration and Thanksgiving at Westminster Abbey. In his Bidding at Westminster Abbey, the Dean of Westminster, The Very Reverend Dr John Hall, asked us to pay particular mind to the recent terrorist attack in Christchurch, to pray for an end of terror and for the triumph of peace. He reflected that for him as a boy, Christchurch epitomised the closeness between England and New Zealand, and that the city is more recently all too frequently in his prayers – whether it be due to earthquakes, or the recent terror attack. He is comforted that Prince William, Duke of Cambridge, is currently visiting Christchurch on behalf of Her Majesty the Queen. The Christchurch attack was mentioned frequently throughout the service, and it was given specific mention within the Prayers. The Dean also called on the UK government to do all that it can to build up friendships with Britain’s old and close friends – Australia, New Zealand, Canada and South Africa in particular.

The Royal family were represented at the service at the Abbey by Kate Middleton, Duchess of Cambridge – and surprisingly, not announced until the time of the service – Prince Harry, Duke of Sussex. His Royal Highness the Duke of Gloucester attended a trifecta of events – the Dawn Service, Cenotaph, and the service at Westminster Abbey.

A retiring collection was made for Combat Stress (veterans’ mental health).