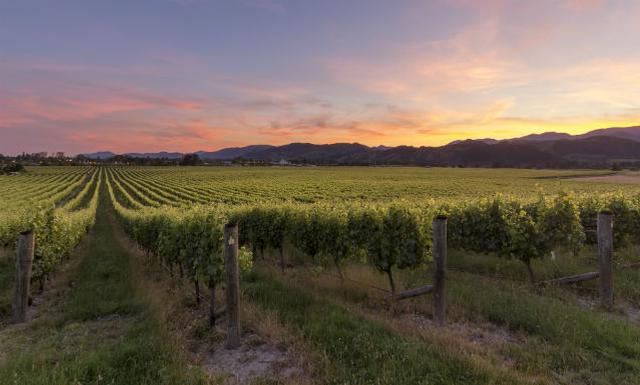 In 2019, New Zealand will be celebrating 200 years since the first vine was planted on its shores.  From 100 grapevines originally planted in 1819 by Yorkshireman and Christian missionary, Samuel Marsden, there are now close to 40,000 hectares of vines covering New Zealand soils.

Growth has been rapid since the turn of this century: in the past 20 years, the total vineyard area has more than tripled. In 1998 New Zealand exported just 15 million litres of wine, worth NZ$100m and in 2018 exports exceed 255 million litres, tipping $1.7bn.

In the UK, the appetite for New Zealand continues unabated, being the only country showing both volume (+6.3%) and value (+6.6%) growth in the off-trade*. The first Marlborough Sauvignon Blanc was released in 1979 and, when it was first shown in the UK in the 1980’s, the country’s distinctive style wowed and refreshed palates.  Since then, New Zealand’s increasingly refined yet always vibrant and fresh style of Sauvignon Blanc has seen the country’s share of UK Sauvignon Blanc sales rise to 47% in the off trade*.

However, New Zealand isn’t all about white wine; Pinot Noir has come of age since the first modern plantings in the 1970s and now represents 77% of the country’s red vineyard area.  Its various styles from fresh and fruity to savoury and complex have made the country’s reds highly desirable: a bottle of New Zealand red wine fetches £9.43 in the off-trade, over £3 more than any other country.

All varieties of New Zealand wine will be celebrated at the annual trade tasting in London on 16 January at County Hall, London. More than 400 wines will be available to taste with some of the country’s top winemakers in attendance. To celebrate the 200-year anniversary since those first plantings in Northland, a selection of wines from the region will be available to taste for the first time in the UK.

Master Sommelier Ronan Sayburn will be scratching the surface of Marlborough in his seminar Digging Deeper while Master of Wine Rebecca Gibb will explore the many faces of Hawke’s Bay and Central Otago in separate masterclasses.

Other highlights include self pouring opportunities exploring Chardonnay and a Sommelier Sauvignon Selection – wines chosen by Sommeliers who have visited New Zealand on the Sommit, the New Zealand Winegrowers Sommelier scholarship.

New Zealand Winegrowers Europe Marketing Manager Chris Stroud says: “The New Zealand Annual Tasting in the UK has been going since the 1980’s and is the biggest showcase of New Zealand wine globally.  The UK is a very strong market for New Zealand and its popularity is not waning as we are celebrating over 20 years of consecutive growth in sales.  This tasting should be a must attend event for anyone with any interest in New Zealand wine.”