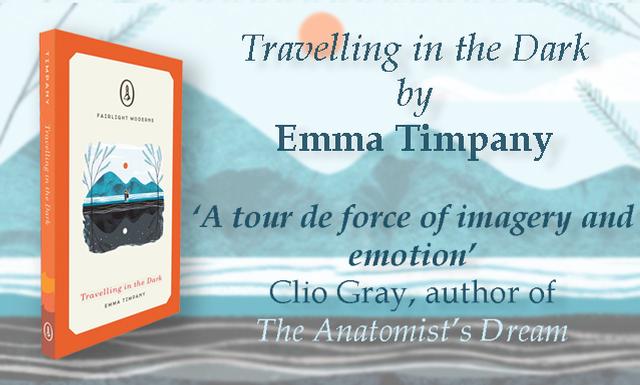 Emma Timpany’s Travelling in the Dark weaves a tale of homecoming that will resonate with many, and particularly with those who may have left painful memories of their homeland behind to put down roots elsewhere. It tells the story of Sarah, a New Zealand woman returning home for the first time in a decade, with her young son in tow. It captures the intoxicating beauty and drama of New Zealand, as well as the sense of belonging that anyone who has left feels every time they return – regardless of how long they may have been away. Sarah’s struggle is one that many will relate to... for a complex array of reasons.

Timpany herself is a New Zealand writer who now calls Cornwall home, where she is married with two children. The novella is certainly written from the perspective of the importance of  homecoming, rather than the story giving much detail to the events that happen in the years that the central character has been away; the years that have really shaped who she is today. What we do learn of Sarah is that she left New Zealand because she had a great opportunity (to join an archaeological dig in Greece) – what Sarah learns for herself, is that the true reason for leaving home was a desire to run away, as is the case for many who suddenly up-sticks and move to the other side of the world (myself included)! Sarah then moves to London, gets married, and has little to do with what she left behind in New Zealand. Some years later, divorced, she returns home to a friend in need of her support, a friend who was instrumental in her departure in the first place.

Travelling in the Dark is an evocative journey through Sarah’s struggles – both physical (when earthquake debris literally blocks the road ahead, among other obstacles) – and emotional, as she is forced to face the pain of her past.

The New Zealand landscape is incredibly vivid through Timpany’s writing – anyone far from home should brace themselves for a dose of homesickness. The descriptions of real places, as well as actual events and their impact – such as the 2011 Christchurch earthquake, will really jolt Kiwi readers in particular. There’s a sense of realness that stands out and holds its own, independent of the fictional story.

The story itself leaps back and forth between Sarah’s youth and the present day, and is gripping enough to keep reading. However I didn’t find any of the characters particularly likeable, including Sarah’s young son, and crucially, her long lost love and friend Patrick, who she has returned to visit. Patrick’s general demeanour, as well as his behaviour and treatment of Sarah – especially in her memories from her years as a young adult – makes it difficult to understand why she should feel such affection for him. The ending of the novella was also inconclusive, and although this is clearly intentional, having joined Sarah so far along this journey, I would have gained greater satisfaction from seeing just a little more of what will happen next. Nonetheless, Travelling in the Dark is beautifully written, and a great short read.

Travelling in the Dark – by Emma Timpany, paperback published by Fairlight Books

Charlotte Everett has been contributing to NZNewsUK as a columnist and journalist since 2011, and currently serves as London Editor – a post she has held since mid-2013. She has been based in London since mid-2007 and has a broad writing portfolio, including music/entertainment, theatre reviews, travel, rugby, Kiwi success, vegan food, and WW100/ANZAC. She is also an experienced freelance tour guide, and leads city walks across London and Oxford several times a week. You can follow her on Twitter or Facebook.